What is an ovarian cyst?

Ovarian cysts are a common pathology since at least 5% of women will develop one during their lives. Since 2013 they are referred to as PBOT, i.e. presumed benign ovarian tumor, as opposed to malignant ovarian tumor or ovarian cancer, which will not be treated here.
Most often, it is a functional cyst that will disappear in less than 3 months without treatment.
But in 20% of cases it is an organic cyst, i.e. a dermoid cyst, an endometrioma, a serous cyst or a mucinous cyst. The frequency of organic cysts is estimated at 12/100,000 in France. 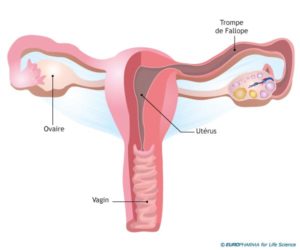 In about 80% of cases, ovarian cysts are functional ovarian cysts since 5% of women will develop them at least one in their lives..
They reflect the ovarian function. They are slightly more frequent in women taking contraception by progestin-only (mini pill, implant, IUD) or by combination pills with low doses of Ethynil Estradiol (less than 20 G).
In most cases they do not require any medical or surgical treatment and the functional cyst will disappear spontaneously in a few weeks of time (90% will have disappeared in 3 months).
A simple ultrasound check after a few months will show the disappearance and confirm the functional cyst diagnosis.
It is not necessary to take a combination pill (estrogen progestin treatment) to remove the cyst.
On the contrary, organic cysts do not disappear. They are developed from the cells of the ovary. 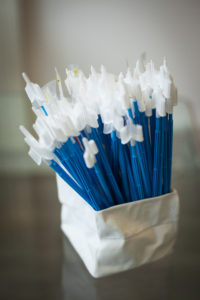 The ovarian cyst is sometimes painless and is discovered by accident.
In most cases, a simple pelvic ultrasound is sufficient. It allows to define the size of the cyst, its nature and if it shows signs of malignancy.
An MRI may be necessary.
Finally, a blood test will be requested.

It is an organic ovarian cyst, i. e. it will not disappear spontaneously.
This cyst can be composed of different tissues with skin cells, fat, bone, teeth…
This is the most common type of cyst in young girls.
It can sometimes be very large.
Its treatment will require laparoscopic surgery.

It is an organic cyst also called endometriotic cyst. This means that the cyst wall consists of cells comparable to those of the endometrium.
Endometrioma is not synonymous with endometriosis, although the two are often combined.
This type of cyst can generate a small fertility impairment.
This organic cyst does not always require surgery, even if the cyst is more than 3 cm long. It will sometimes be recommended to take hormonal treatment or to have percutaneous ethanol injection.

The diagnosis of this type of organic cyst is only given with the results of anatomopathological analyses carried out after surgery, i.e. intraperitoneal ovarian cystectomy.
Ceolioscopy will be performed if the cyst persists for several months.
Its appearance on imaging is very similar to that of a functional cyst, whether on ultrasound or MRI.

Symptoms of the disease

The ovarian cyst may be accidently discovered during a consultation with the gynecologist or during a pelvic ultrasound (abdominal or endovaginal) as it may be asymptomatic.
The ovarian cyst can be symptomatic as well: a pelvic discomfort or heaviness up to and including pain, a discomfort during sexual intercourse, heavyness, constipation, difficulty urinating, bleeding, fertility disorders.
An unknown ovarian cyst can trigger severe pain. It is therefore essential to consult urgently as it may be a surgical emergency.

It is common to find a cyst on the ovary in the first trimester of pregnancy.
This cyst is the corpus luteum. It is the one producing the hormones necessary for the implantation of the egg into the uterus and is therefore “normal” during a pregnancy and will not be treated.
Surgery will only be offered in rare cases of organic cyst. In most cases surgery will be performed during the second trimester and the laparoscopic approach will be preferred.

Torsion of the ovary

This is an emergency!
The ovary is a relatively mobile organ within the pelvis. When it carries a cyst, it becomes bulky and can behave like a Christmas ball hung by a bolduc thread and twist while doing turns. This is a torsion.
For anatomical reasons, the fallopian tube and ovary twist together. In this case, the blood no longer irrigates the ovary carrying her cyst. It is in distress. The woman then feels a sharp pain. This is a surgical emergency.
Indeed, it is considered that after 6 hours the ovary is necrotic, i. e. dead. A laparoscopy is urgently needed to save the ovary and remove the ovarian cyst, which is called a laparoscopic cystectomy.

The functional cyst is destined to resorb spontaneously. During this process, the cyst wall may crack or rupture. This can cause bleeding, i. e. in medical language a hemorrhage that can be inside the cyst (intracystic hemorrhage) or outside the cyst (peritoneal hemorrhage or internal bleeding).
This bleeding can result in a single sudden pain or subsiding pain.
Depending on the bleeding volume of the functional cyst, a laparoscopy* may be required to perform an ovarian cystectomy. *

In most cases the organic cyst does not require treatment, except if it is large and uncomfortable or in case of an emergency, such as a torsion of the ovary or hemorrhagic cyst bleeding inside the abdomen.
Organic cysts often require further surgical treatment. Most of the times a mastectomy by laparoscopic procedure is performed, also known as intraperitoneal cystectomy. Sometimes the total exeresis of the ovary in will be proposed.
When such surgery proves necessary in a postmenopausal woman, it will be proposed to perform an excision of both ovaries.
In a few rare cases that will not be detailed here, it will be necessary to perform a laparotomy.